It has been a very long time indeed since I last posted anything on this blog. I have been having many BCATP adventures over the past many years but not sharing any of that here on this site. Here's a small sample of some of the images of BCATP locations in Calgary captured from a 1948 aerial photography series. Enjoy! 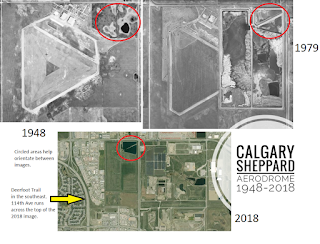 Posted by History Buff at 5:13 PM No comments:

If you are reading this and you followed this blog since 2011, you are very patient to say the least. It has been somewhere in the order of 6 years since I last updated this place and I am deeply sorry for the neglect of what I created here.

I have greatly slowed my collection of BCATP historical items from the pace that I had back prior to 2011. It was solely from financial consideration, not loss of interest in the history of this amazing period of aviation history in Canada. That being said, there is still so much that I can share from my collection and general interest in the subject matter.

My biggest passion for the BCATP has been so greatly inspired by collecting the aeronautical maps from the height of the plan. Airfields and airports literally sprung up out of the soil across the country in a very short period of time. I am sure at the time that planners thought these installations may be used for decades to come but in so many cases, once the war was over, the use for the airfield ended.

Here are a few snapshots that I hope you enjoy. 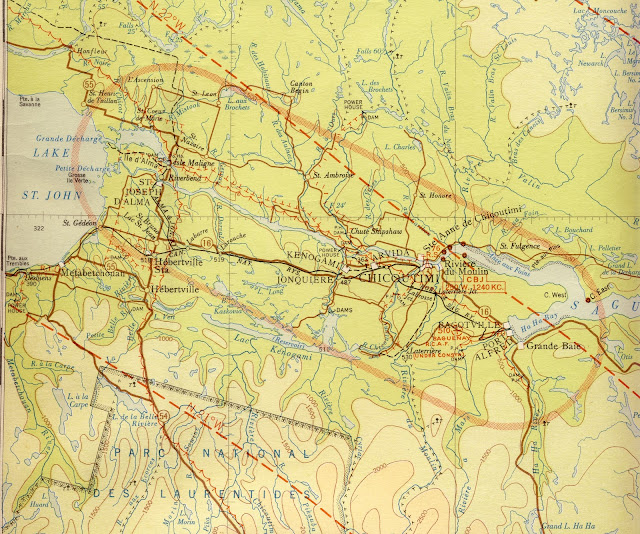 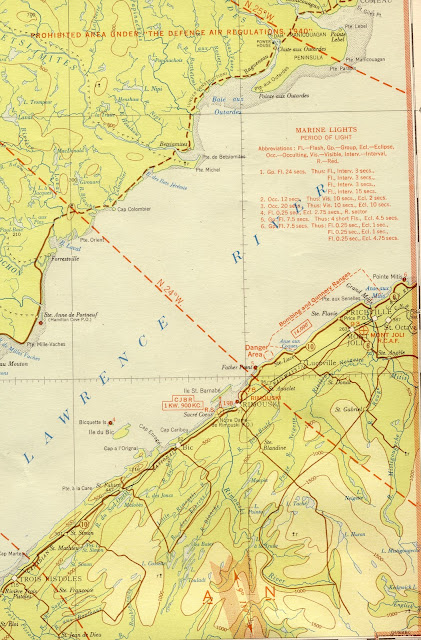 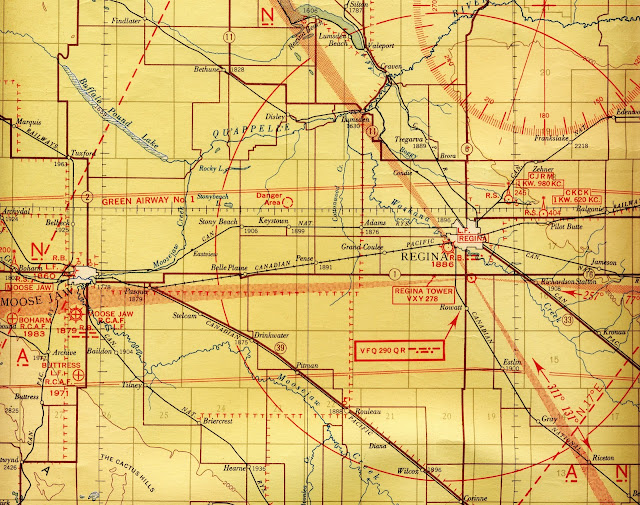 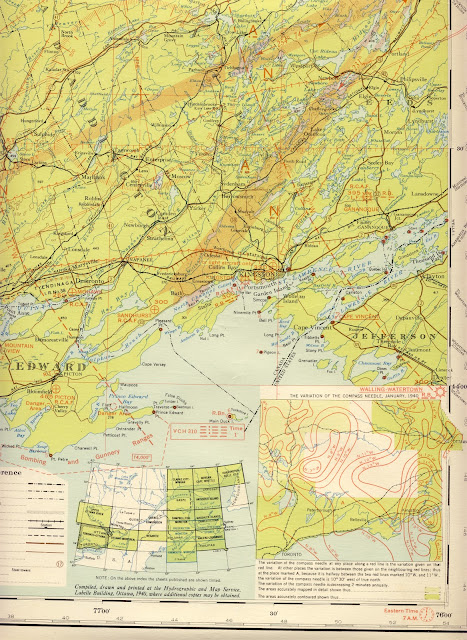 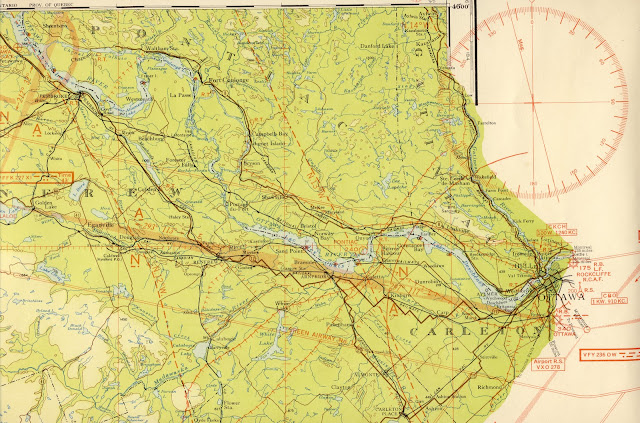 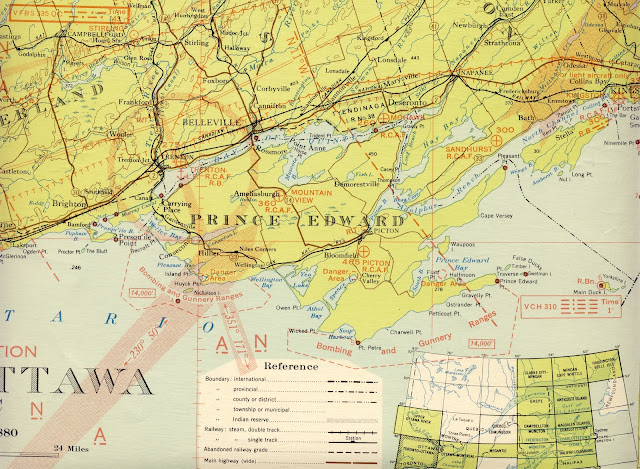 Posted by History Buff at 9:08 PM No comments:

I am sincerely sorry that I have been neglecting this blog fo so long. I have a large collection of BCATP materials that I think people would find interesting that I want to share with all of you. We also have a group on Facebook, "BCATP in Canada" that you might find interesting and entertaining with thousands of photos.

I do have some exciting news to share with you regarding the history of the BCATP. Vintage Wings of Canada is already actively touring Canada with several BCATP aircraft in a bid to celebrate and remember the important history of the plan's contribution to the Allied victory in WWII. Check out the tour schedule here: http://www.yellowwings.ca/?page_id=44 Check the schedule to see when the tour will be making a visit to an airport near you!

Another new development is the restoration and return of aircraft to the Vulcan Aerodrome south of Calgary. New owners of the aerodrome property have been most busy working to save the remaining 6 hangars and clearing away years of debris from the runways and taxiways. A fly in was held in conjunction with the Bomber Command Museum of Canada at Nanton last summer and the aerodrome may be home to skydivers and Air Cadets this summer. Such great news coming out of southern Alberta where the last BCATP sites have essentially been left to fade into the prairie soil when some of the history should be preserved. Check out this site to see what is happening at the Vulcan Aerodrome now! http://vulcanairbase.com/

Lastly, I work for an aviation company who are gauging interest in an aerial tour of BCATP sites here in Alberta. We are checking to see if there would be enough interest to host a day long tour of several Alberta aerodromes and satellite airfields along with the Bomber Command Museum of Canada in Nanton http://www.bombercommandmuseum.ca/lancfm159.html(home to the Bazalgette Lancaster FM-159) and possibly the Bombing and Gunnery Range west of Lethbridge. If you think you would be interested in a day long aerial tour of BCATP sites in Alberta, please send me an e-mail at kmeintzer@integraair.com .

Thanks for visiting my BCATP blog. I really appreciate your e-mails with your comments and suggestions. Write to me about the blog at kmeintzer@hotmail.com

Hello all once again!

I know that I have been promising you a new post on here for quite some time and I think I have a real treat for you this time.

I recently received a batch of new photos and pamphlets from the BCATP and I really wanted to share the recruiting pamphlet with you. I think it really speaks to the manner in which the military recruited aircrew for the BCATP and subsequently the fight for WWII. 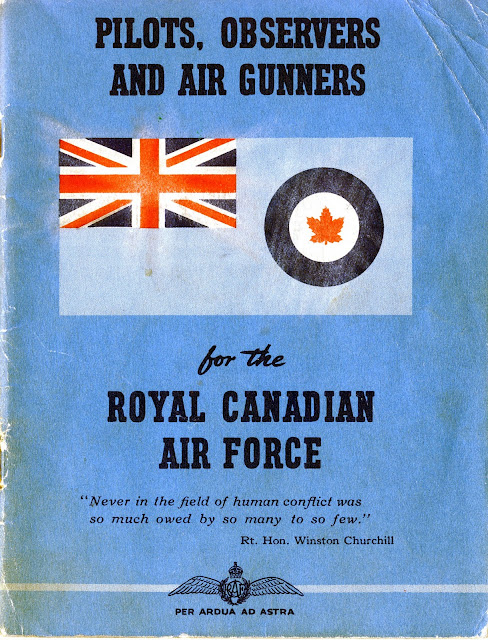 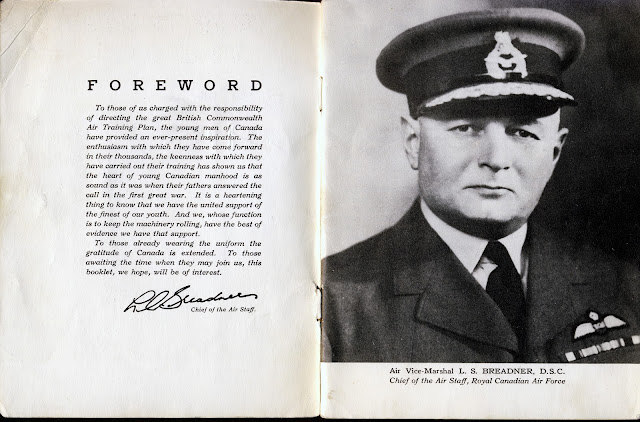 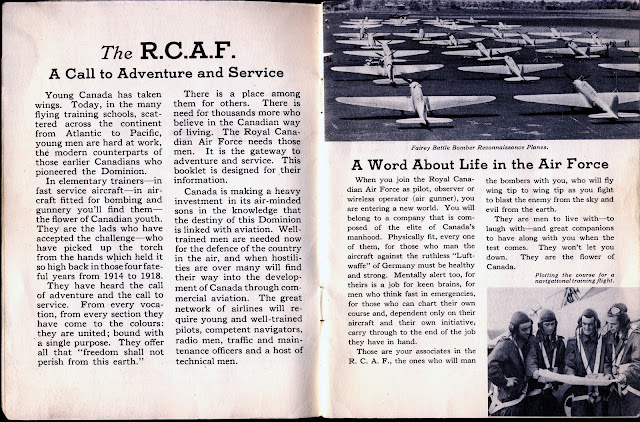 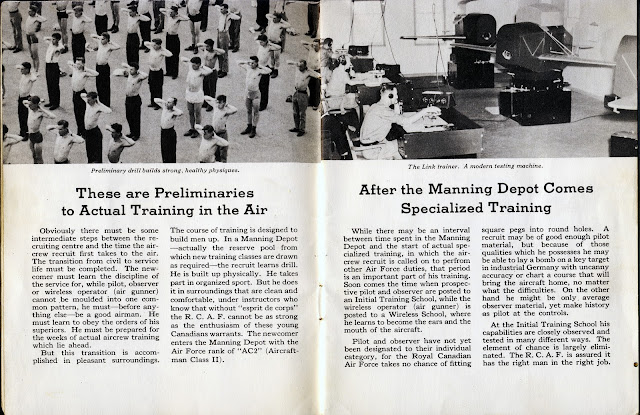 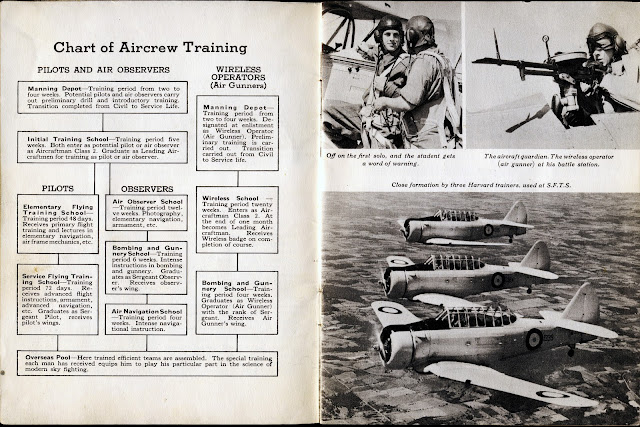 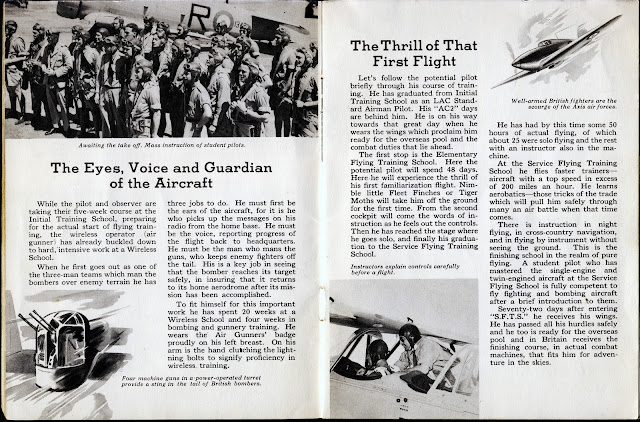 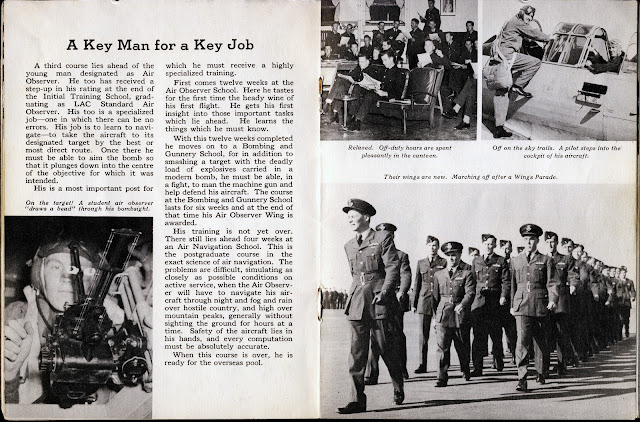 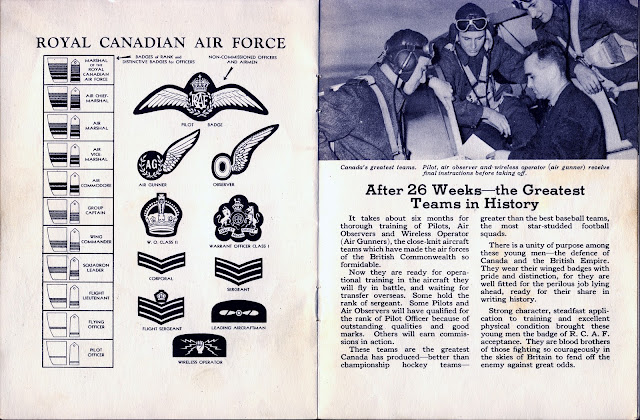 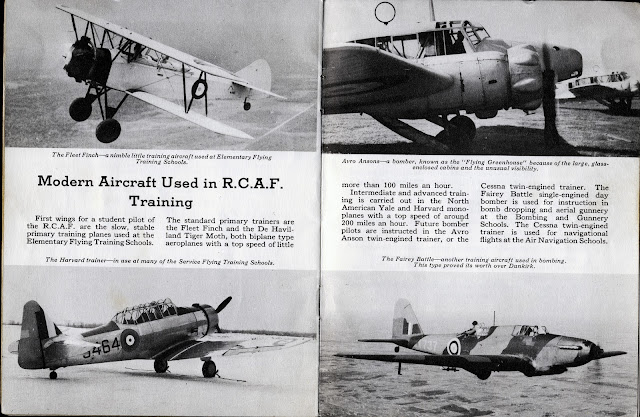 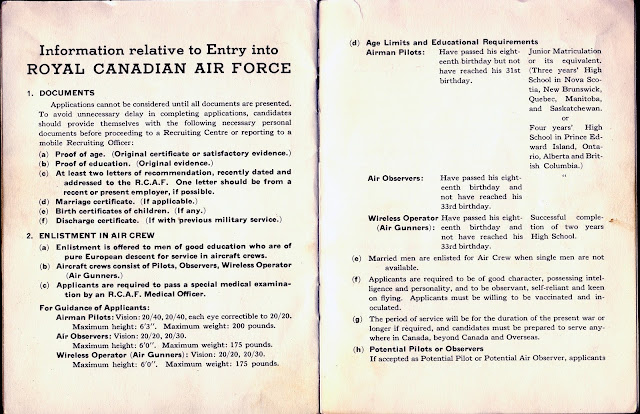 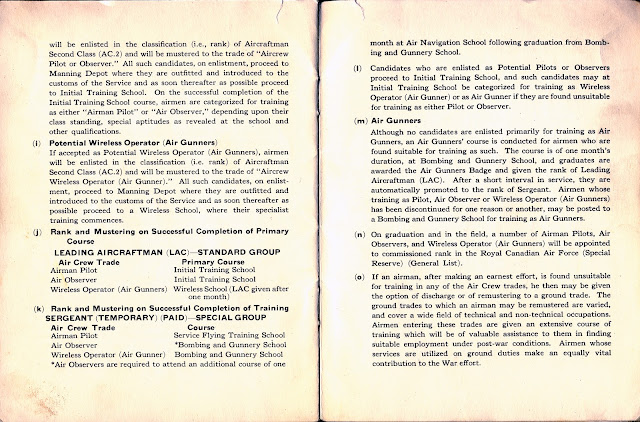 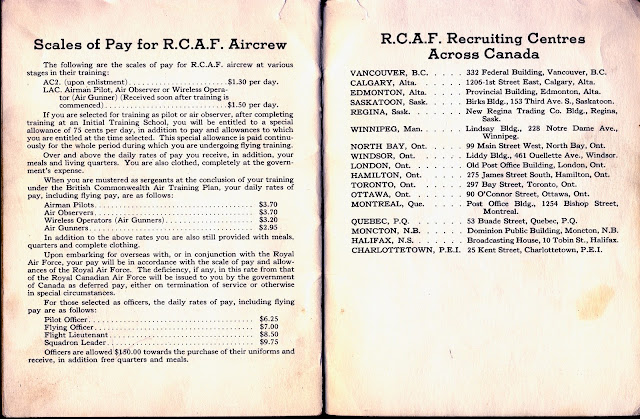 Hello all and another appology for the long, long breaks between posts on this BCATP blog.

Here's hoping you all got the chance to pay your respects to the veterans of the Canadian Armed forces in your own unique way today. I attended the services here in Airdrie, Alberta and was pleasantly surprised for the second year running at the wonderful turnout. It is estimated that more than 1500 people were at Genesis Place for the indoor ceremony which featured a large number of veterans along with many representatives of the Canadian Armed Forces, the R.C.M.P., firefighters, Air, Navy and Army Cadets along with many, many service groups.

Check out my companion blog "Airdrie Legion" for many photos of today's events.

I have recently acquired another great collection of BCATP photos and paraphenalia which I look forward to sharing with you very soon.

Thanks again all for your patience.
Posted by History Buff at 9:03 PM No comments:

Edmonton City Centre Airport To Have Fate Decided in Plebecite.

Hi all and another apology for such a long break between posts on here.

As you may or may not be aware, the Edmonton City Centre Airport had one of its two remaining runways closed and decommissioned at the end of July, leaving the transportation hub without its very appreciated Instrument Landing System and one less option for arriving and departing aircraft. The closure is all a part of the Edmonton Airport Authority's plans to close what was once "Blatchford Field" and for years "The Muni",  in stages. A group of concerned people and businesses known as Envision Edmonton have been working feverishly to collect enough names on a petition to force a referendum by the citizens of Edmonton in this Fall's Civic Election. Just this week, with only days left to their deadline to reach their required number of signatories, Envision Edmonton announced that they were successful in collecting the 78,000 + names needed to back their quest to let the citizens of Edmonton decide the fate of this once proud airport.

During WWII the Edmonton Airport or  Blatchford Field was at one point the busiest airport in the world with hundreds of aircraft arriving and departing each day. The BCATP had a presence here with # 2 Air Observer School and #16 Elementary flight Training School and the one prominent reminder of the BCATP at the airport today is the "Double Hangar" which is home to the Alberta Aviation Museum. Blatchford Field was also a major cog in the wheel that saw thousands of American made warplanes from P-39 Airacobras to C-47's and even a Harvard trainer or three flown through Alberta enroute to the Soviet Union as part of the Allies Lend-Lease program. Edmonton was the last significant stop for northbound aircraft headed through northern Alberta, British Columbia and into the Yukon territory enroute to Alaska for the hop across the Bering Strait.

When the Second World War ended, Blatchford Field was a state of the art aviation installation...for the propeller age. Edmonton had slowly grown around the airport leaving no options for expanding the runways to accommodate aircraft of the jet age. Yet the City Centre Airport (as it is now known) entered the post war era very well positioned to play a very long and valuable role as a commuter facility.

Perhaps all of the modern day hand wringing about which of Edmonton's airports would eventually do what could have been settled more peacefully back in the 1960's. When the Edmonton International Airport opened in their new terminal building in 1963, that was a golden opportunity to prioritize the roles that both the International and the Muni could play in Edmonton's aviation future. For whatever reason, both airports were permitted to operate essentially in competition with one another for passenger routes. The end result was that passengers chose the convenience of the Muni in close proximity to downtown over the significant drive to the then very distant International. Airlines that could operate out of the shorter runways at the Muni did so and longer haul flights gravitated to the International out of sheer necessity. Problem was that feeding larger international flights through connecting domestic and regional flights was impossible as those passengers were landing at the Muni and not the International. The lack of connecting passengers resulted in airlines favoring the single airport in southern Alberta for larger transcontinental and international routes.  It got to the point that Calgary gradually snagged just about any advantage that Edmonton ever had at the end of WWII and slowly became the hub of choice for passengers wishing to travel both domestically and internationally in the same trip.

When the decision was made to consolidate scheduled service at the International in 1995 in an attempt to win back passengers and flights that had gravitated to Calgary, that was not an open invitation to plan the eventual demise of the Muni. But clearly, the Edmonton Airport Authority had lost their interest in long term plans for the downtown airport, effectively slowly strangling the place until it looked advantageous to close the facility. Despite the apathy, the airport has still managed to stay quite functional and busy regardless. Imagine how much more traffic there could be going in there if there had been a plan other than slow atrophy?

So what can be done now? Well, I firmly believe that the Edmonton City Centre Airport still has a very important role to play in Edmonton's aviation future. The airport can continue the role it has played for the better part of 100 years as a place for new pilots to earn their wings, a very well situated alternate airport for IFR flights to use on poor weather days, a very enviable location for medical evacuation flights and particularly for organ transplant missions and as a launching place for small charters to the northern communities that played such an important part in Edmonton's title as "Gateway to the North".
Posted by History Buff at 6:33 PM No comments: